Disney Castle today was pretty awesome. Then a storm began at the top of the mountain and accompanied us down the mile walk to the waiting bus. We didn't get that soaked because of the tree cover, but it was still a bit of a rainy ending to an otherwise sunny and beautiful day.

What did I learn today? Ludwig the IIIrd who built all of these castles was a bit cray-cray... in that his obsession for Wagner and all things Wagner went a bit too far in my opinion.

He made a grotto in his backyard hoping that Richie would come hang out with him and play his music just for him. He also built in his other castle a mock up of the exact set of Wagner's first Parsifal and hoped that Richie and his buddies would come perform it there..for him...alone...

He also wrote personal letters to Wagner asking him to come visit and telling him that he's remodeling his new castle based on his first operas.

I also bought a stuffed little green dragon called Georg, but I think I will rename him something cooler and more dangerous sounding...like ...TROGDOR!!! The BURNINATOR!!! (Please see link to Strongbad if you have no idea what I'm writing about).

Now for a picture maybe, if the upload option in German works. 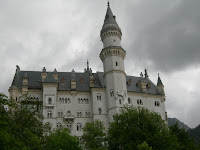 and my new best keychain friend:
Georg aka Trogdor the burninator' 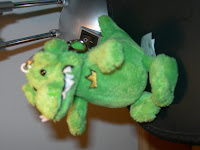 (I think this is going to come out sidewayz, but I'm not going to do anything about it. Deal).

So that's my story for today. We came back "home"--not home yet since my desk for studying is filled with everything that I haven't unpacked yet-- and studied German verbs for about an hour (trying to memorize both their meanings and whether they take the dative or accusative or BOTH depending on the definition(s) ).


This week is supposed to be really cold again so I'll be appreciating my new HandM sweaters and leggings that I bought last week while I was freezing in the rain here.

me
Yes, I've shattered a glass